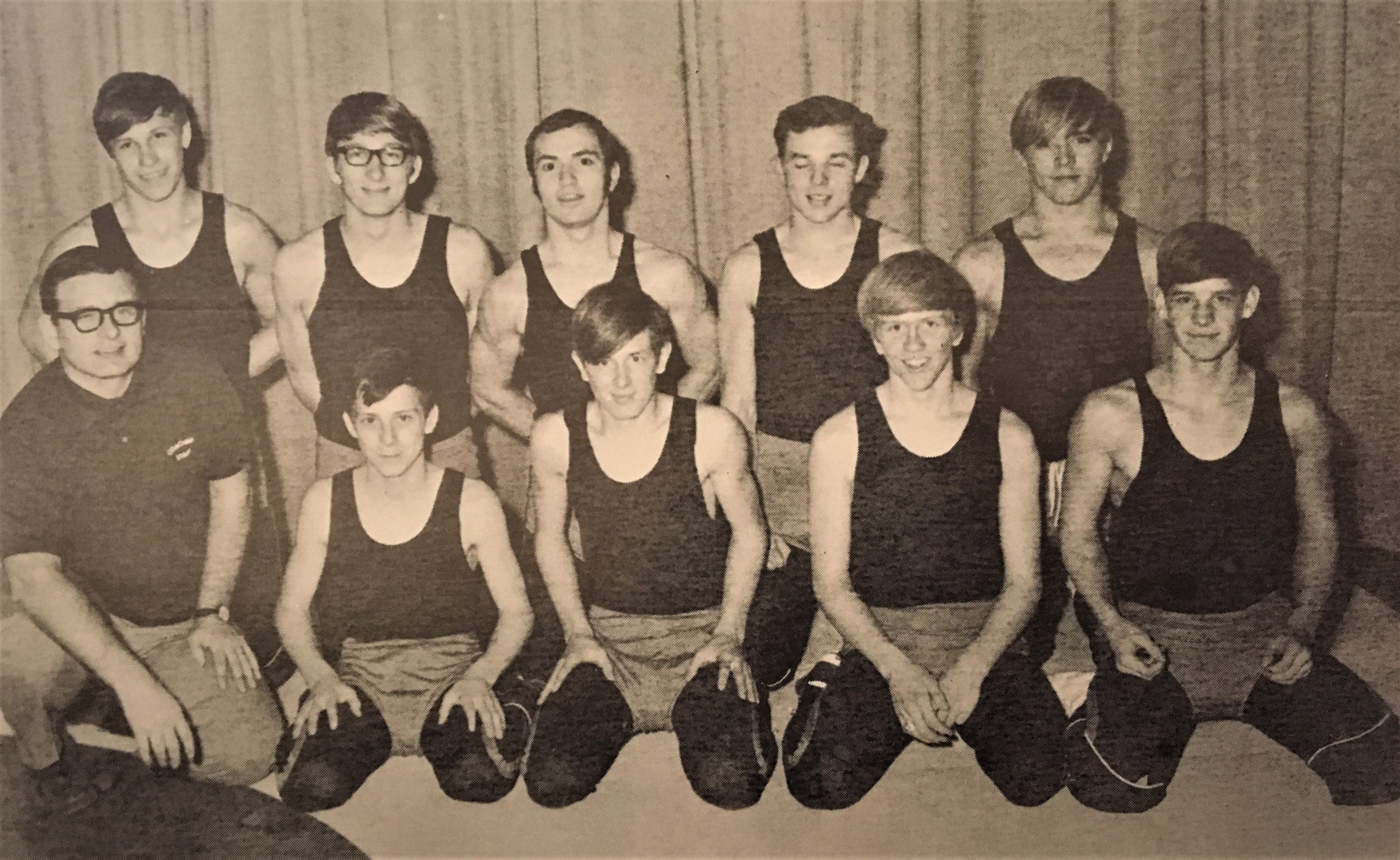 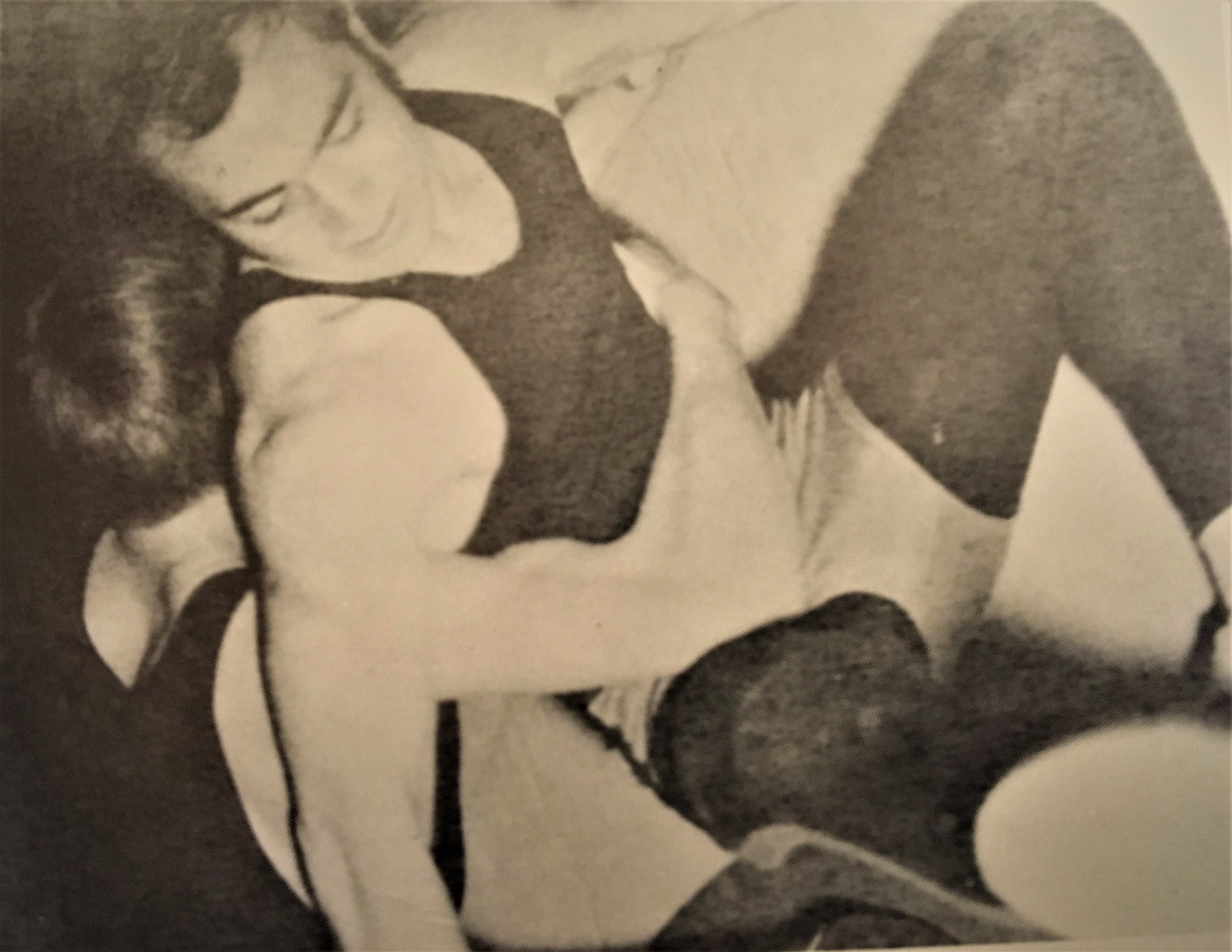 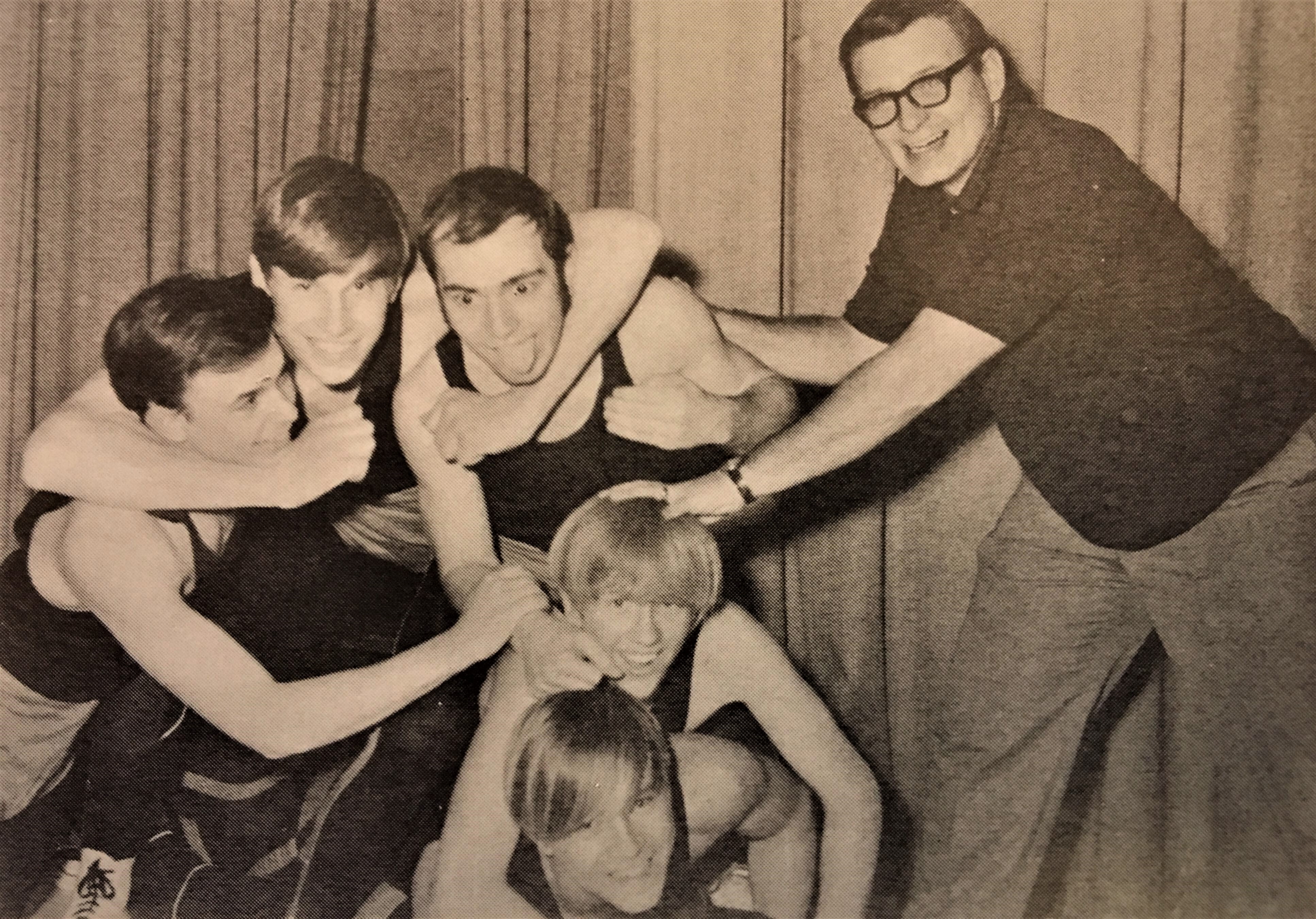 The boys and Coach Berg clowning.

Top row left to right: Ken Slaby, Dave Jarstad, Bob Shanklin, and Coach Berg. The top of the bottom two guys is Jim Ritland and below him is Jeff Larson. 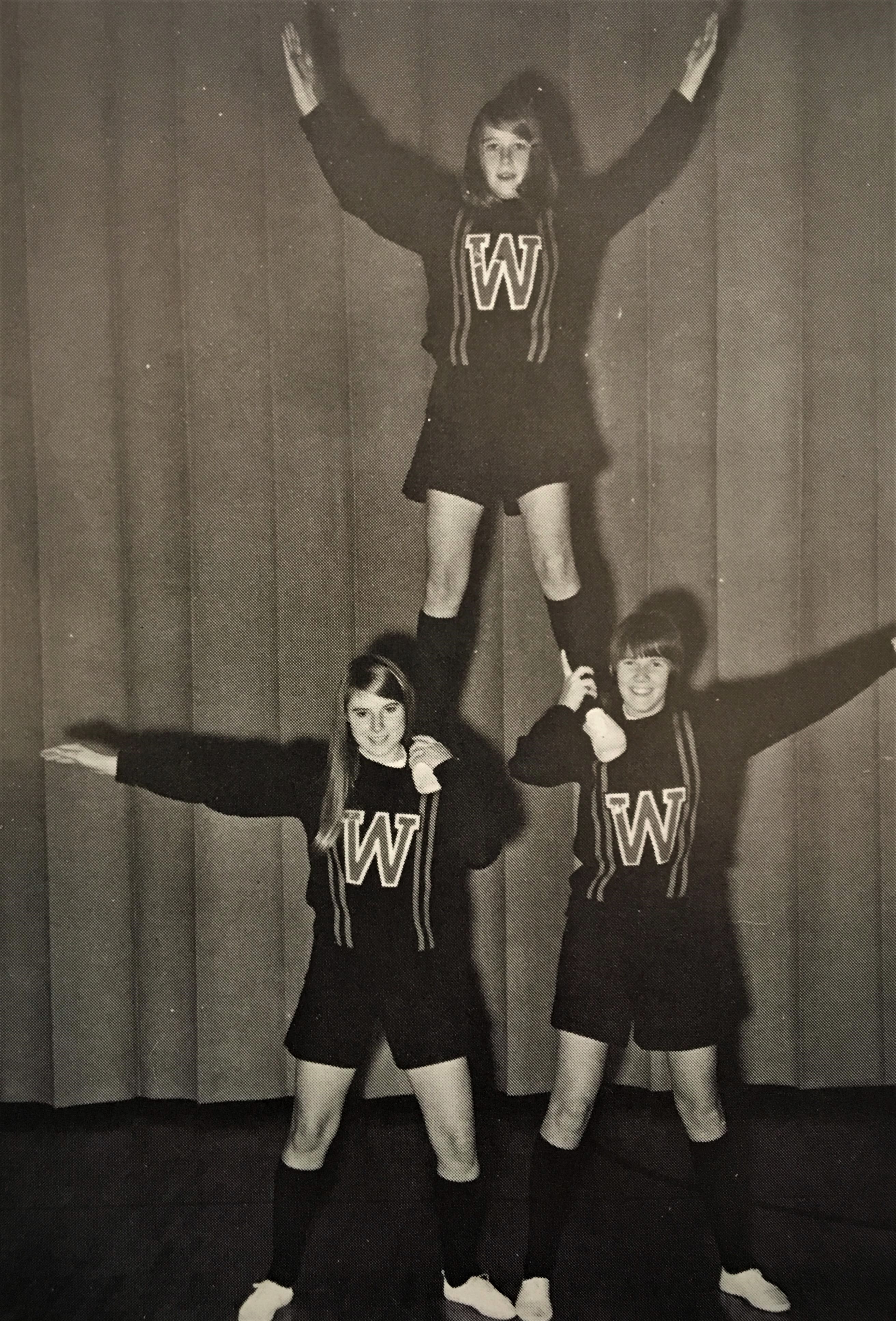 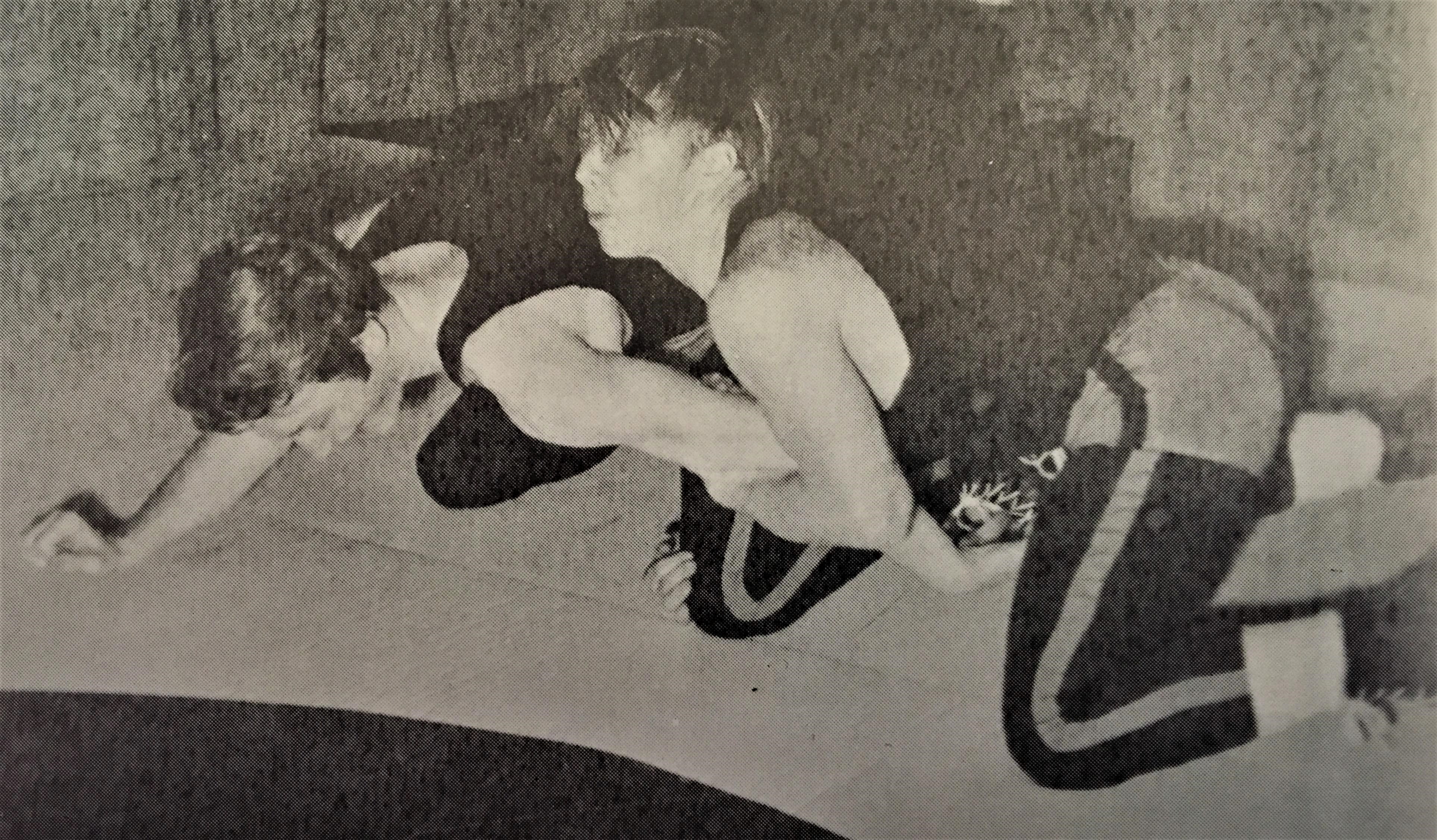 The wrestling season of 1969-1970 for the Norsemen started off well with the team going 2-0 in dual action but the gang faded due to a loss of experience through graduation and a shallow depth chart. Second year head coach Clark Berg had to manage around forfeits and a team that had a hard time scoring points. This does not take away from the great effort given by all  the wrestlers on the mat. At the end of the season one veteran wrestler and two young wrestlers made some excitement happen for Whitehall in the Dairyland Invitational and the WIAA tournament series.

During the dual season, Whitehall started out red hot taking out Osseo and then Eleva-Strum. The team relied on veteran leadership from guys like Mel Nelson, Jim Ritland, and John Dubiel.  In week three the Norsemen ran into a one two punch from Independence and then Augusta and it became tough to get traction on the season from there. Whitehall finished up that season with Blair, C-FC and Alma Center.

In the post season the Black and Orange got some nice runs from senior Mel Nelson and rookies Brian Borreson, and Bob Shanklin. The first stop for the tournament series was Blair who was hosting the Dairyland Invitational. Borreson picked up a 4th there. Next was the 1970 WIAA Regional Tournament hosted by Whitehall. Bob Shanklin picked up a respectable 4th, Senior Mel Nelson was one match away from returning to sectionals taking a third in front of the hometown crowd. Rookie Brian Borreson finished with a 2nd. That silver was the ticket Brian needed to go to his first ever one division sectional tournament held at La Crosse. At the Sectional Borreson had a great finish in 3rd place.

This becomes a transition season in the History of the Norsemen. Mel Nelson was a star wrestler between the first generation of Norse wrestlers and the beginnings of the next generation of stud wrestlers that won't have a connection from the previous Linse era. Upon his graduation, the institutional memory of the origins of Whitehall Wrestling go with him.

And what about this new crop of Norse wrestlers. Oh my. the story gets better. These teams will continue to thrive and that rookie Borreson is going to go on to make some big history for the Program. ?? Days until the 2019-2020 season starts.